I originally edited together a bunch of dissimilar information into a comprehensive overview of the Scottish Rite back in 2007. Since then, what I wrote was lovingly copied and pasted onto a whole bunch of websites, with all reference to my sources and myself cut from the work. I’m reposting the work here, so I get at least SOME credit for the work I did. – Shawn Bell, 32° 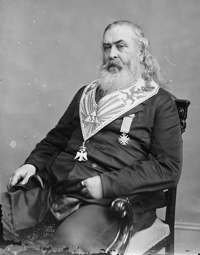 History
Our Supreme Council has in its Archives copies of the Degrees of the Rite of Perfection and of additional Degrees, including the 33°, which were in use at Charleston in 1801. Some of these old Degree documents are fragmentary, and some Degree manuscripts have not survived the centuries.

In the mid-19th century, Grand Commander Albert Pike revised these Degrees. He retained the original titles, substance, and sequence. Out of his own great scholarship and knowledge of ancient philosophies, he added new substance and significance to the Degrees, which enhanced their importance. The Southern Jurisdiction has continued to use the basic Albert Pike Rituals. While the Rubrics permit variations in the manner of their rendition, the Degrees have remained otherwise relatively unchanged. The Pike versions are also widely, although not exclusively, used elsewhere. For the past several years, as authorized by the Supreme Council and its Committee on Ritual and Ceremonial Forms, Dr. Rex R. Hutchens, 33°, Grand Cross, author of several authoritative books about Pike’s writings, has worked with a resource team of experienced Brethren to modernize the language, accent the significance, and enhance the dramatic performance of the Pike Degrees. The Revised Standard Ritual maintains the moral vision and philosophical integrity of the original Pike Degrees while making them more accessible to contemporary Brethren. The new Degrees are being honed through authorized trial performances in Valleys throughout the Southern Jurisdiction and is the official Ritual of the Scottish Rite, Southern Jurisdiction, U.S.A. END_OF_DOCUMENT_TOKEN_TO_BE_REPLACED

The Knights of Saint Andrew is a chartered service group of the Scottish Rite designed specifically for 32nd Degree Masons. The Knights were first chartered in 1993 at Tulsa Oklahoma where they serve through visible participation in reunions and other Valley activities. Chapters of the Knights are organized to provide social and fraternal activities at the 32nd members and also to serve as a service organization to the Valley.

The Ancient and Accepted Scottish Rite of Freemasonry – or, the Scottish Rite, is one of several appendant bodies that are a part of the worldwide fraternity known as Freemasonry.

The Scottish Rite builds upon the ethical teachings and philosophy of the Blue Lodge, through dramatic presentation of degrees. Membership is open to all Brothers and fellows who have attained the degree of Master Mason in a recognized Blue Lodge. Degrees conferred consist of the 4th through 32nd Degrees. There is also an honorary 33rd degree, which is awarded for exceptional service. END_OF_DOCUMENT_TOKEN_TO_BE_REPLACED

Whether you’re just curious about the fraternity, a new Mason or a Past Master, one of the best books about Freemasonry is Freemasons for Dummies by Chris Hodapp.

First published in 2005 (and now available as an eBook through Amazon and Barnes & Noble), Freemasons for Dummies explains the fraternity in detail in a manner that is not only entertaining, but also easy to understand.  This well-written book breaks down a somewhat complicated and certainly convoluted history of Freemasonry, and lays everything out in a simple, logical format.  The writing is both charming and eloquent. The author, Chris Hodapp, displays a deep knowledge of the subject matter and a reverence for the fraternity that can only come from someone with a long history in the Craft. END_OF_DOCUMENT_TOKEN_TO_BE_REPLACED