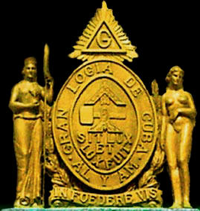 E C Ballard has posted an interesting article discussing Freemasonry in Cuba on his blog.  From the article:

Cuban Freemasonry is unique in the world for operating openly in a communist nation. What can explain that, given that in most other communist nations Freemasonry has been condemned? For that answer, it is necessary to look at the role that Freemasonry played in the original Cuban Revolution or as some people speculate. the affiliation of the Castro brothers themselves?

Cuba is the only country under the administration of a Marxist government that tolerates throughout its territory an important secret society with an esoteric background: Freemasonry. Today, in the beautiful and economically challenged island of Martí and Maceo, no less than 318 Masonic lodges flourish, openly attended by about 30,000 registered members. Such numbers are high for a country with so small a population as that of Cuba. Various Afro-Cuban religions, Palo Congo, Yoruban Ocha, Abakua, and Haitian Vodú among the population of Haitian descent mostly in Eastern Cuba, religions often mistakenly dubbed “santería” – the Cuban first cousins of Brazilian Candomblé and Umbanda also exist in Cuba, the only other power system capable of competing with esoteric Freemasonry in terms of being reasonably free and unrestricted.

The Grand Lodge of Cuba (Gran Logia de Cuba) recognized by mainstream grand lodges worldwide.  Legend has it that in 1958 during Cuba’s revolution Fidel Castro hid out in Masonic lodge.  After the revolution, Castro’s government did take over ownership of many properties – including Masonic Lodges – throughout the country.  Grand Lodge officers fled to Florida and formed the Grand Lodge of Cuba in Exile.  Freemasons in Cuba elected new Grand officers, and continued to meet.  The government never shut down the fraternity.  Currently, Cuba has 318 Lodges and more than 30,000 members, giving it one of the highest percentages of Freemasons per capita in the world.

The author, E C Ballard, is a Folklorist, and Ethnographer specializing in Afro-Caribbean traditions of Central African origin, Fraternalism, Celtic Studies and Ethnomusicology, having received his Ph.D. in Folklore and Folklife from the University of Pennsylvania.  You can find his blog The Hedge Mason HERE.