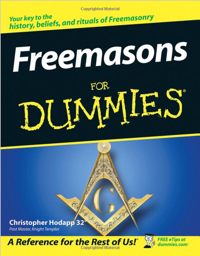 Whether you’re just curious about the fraternity, a new Mason or a Past Master, one of the best books about Freemasonry is Freemasons for Dummies by Chris Hodapp.

First published in 2005 (and now available as an eBook through Amazon and Barnes & Noble), Freemasons for Dummies explains the fraternity in detail in a manner that is not only entertaining, but also easy to understand.  This well-written book breaks down a somewhat complicated and certainly convoluted history of Freemasonry, and lays everything out in a simple, logical format.  The writing is both charming and eloquent. The author, Chris Hodapp, displays a deep knowledge of the subject matter and a reverence for the fraternity that can only come from someone with a long history in the Craft.

The book is organized in typical “For Dummies” fashion, with icons and sidebars that are helpful and informative.  There are six parts to the book, with chapters in each part that divide Freemasonry into easy-to-digest chunks of information.

The book is divided into six major sections, with multiple chapters in each section (with the exception of the Appendixes):

Part I – What is Freemasonry: An overview of the fraternity including it’s history and philosophy.

Part II – The Mechanics of Freemasonry: How the fraternity is organized, it’s symbols, the ceremonies and misconceptions about Freemasonry.

Part III – Knights, Swords, Fezzes and Dresses: Discusses the appendant bodies of Freemasonry; the York and Scottish Rites, the Shrine and the various bodies that are part of the Masonic family.

Part IV – Freemasonry Today and Tomorrow: Discusses the relevancy of the fraternity, how it fits in with society and it’s future.

This is one of the very best books on Freemasonry currently published.  It should be on the bookshelf of anyone interested in the Fraternity.  I would recommend that this book be presented to every new Master Mason as soon as he is raised.