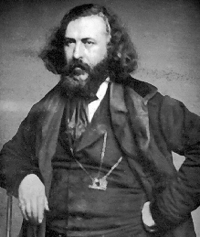 Pike was born in Boston, Massachusetts, son of Ben and Sarah (Andrews) Pike, and spent his childhood in Byfield and Newburyport, Massachusetts. His colonial ancestors included John Pike (1613-1688/1689), the founder of Woodbridge, New Jersey. He attended school in Newburyport and Framingham until he was 15. In August 1825, he passed entrance exams at Harvard University, though when the college requested payment of tuition fees for the first two years which he had successfully challenged by examination, he chose not to attend. He began a program of self-education, later becoming a schoolteacher in Gloucester, North Bedford, Fairhaven and Newburyport.

In 1831, Pike left Massachusetts to travel west, first stopping in St. Louis and later moving on to Independence, Missouri. In Independence, he joined an expedition to Taos, New Mexico, hunting and trading. During the excursion his horse broke and ran, forcing Pike to walk the remaining 500 miles to Taos. After this he joined a trapping expedition to the Llano Estacado in New Mexico and Texas. Trapping was minimal and, after traveling about 1300 miles (650 on foot), he finally arrived at Fort Smith, Arkansas.

Settling in Arkansas in 1833, he taught school and wrote a series of articles for the Little Rock Arkansas Advocate under the pen name of “Casca.” The articles were popular enough that he was asked to join the staff of the newspaper. Later, after marrying Mary Ann Hamilton, he purchased part of the newspaper with the dowry.[citation needed] By 1835, he was the Advocate’s sole owner. Under Pike’s administration the Advocate promoted the viewpoint of the Whig party in a politically volatile and divided Arkansas.

He then began to study law and was admitted to the bar in 1837, selling the Advocate the same year. He was the first reporter for the Arkansas supreme court and also wrote a book (published anonymously), titled The Arkansas Form Book, which was a guidebook for lawyers.[citation needed] Additionally, Pike wrote on several legal subjects and continued producing poetry, a hobby he had begun in his youth in Massachusetts. His poems were highly regarded in his day, but are now mostly forgotten. Several volumes of his works were self-published posthumously by his daughter. In 1859, he received an honorary Master of Arts degree from Harvard.

Pike died in Washington, D.C., aged 81, and – against his wishes – was buried at Oak Hill Cemetery. In 1944, his remains were moved to the House of the Temple, headquarters of the Southern Jurisdiction of the Scottish Rite.