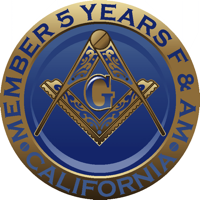 Since I was a child, I have been a member (sometimes in good standing, sometimes less so) of the Roman Catholic Church. I’ve served in various capacities, at different times, in a few parishes. I’ve been an altar boy, an usher, a liturgical minister, a Eucharistic minister, a groundskeeper and – somewhere along the line – I became an ordained minister.

Outside of the Church, however, I’ve never been much of a joiner. Writing is a solitary vocation. Software design ultimately comes down to one programmer and one keyboard as well. I knew my neighbors, visited with friends, and was a good guy … but I mostly kept to myself.

Until, after my dad passed away, I had to go in and deconstruct the lives of my parents. It was then that I found an expired dues card with the Square and Compass on it from some Lodge back east that no longer existed. I knew of the fraternity – growing up, my neighbor across the street was Brother Red Skelton – but I really didn’t know about the fraternity, or how long my family had been involved in Freemasonry. As it turned out, my father, grandfather, great grandfather and great-great grandfather were all Masons. All the way back to Lodges in Scotland, before members of our clan emigrated to America.

Given that this affiliation seemed to be something all the men in my family had been part of, I decided to find out more. My dad had never say a word about the fraternity. One of the first books I picked up was Freemasons for Dummies by Christopher Hodapp which, coincidentally, happened to hit the bookshelves right after my dad’s passing. The more I read, the more interested I became until – by 2007 – I had been raised to the degree of Master Mason.

Today, five years later, no affiliation – outside of the Church – means more to me than my membership in Freemasonry. It is an organization that makes good men become better men. It aids the poor, the distressed, and helps those who desperately need charity to raise themselves from destitution. It encourages men to become role models for their children, their communities and their countries. It promotes patriotism and pride for one’s country. It teaches tolerance for all men – regardless of race, creed, culture or religion – and eliminates divisiveness among all people. It teaches one lesson that is sorely lacking in all other organizations: tolerance.

I am proud to say that I’m a Freemason, and that I stand among men who have helped others up, who have built friendships, who have created empires and countries, and who have aspired to become greater than the sum of their parts. I’m honored to be part of a family that has joined and supported the fraternity for decades so that they might become more than they were when they first knocked on the door of Freemasonry in search of more light, more knowledge and more wisdom. And I am humbled that my example of being a good man has encouraged others – including my son – to join the fraternity.

To answer the question – am I a better man, being a Freemason? – I have to say yes … but I can always improve. Time to get back on the road, and continue my journey.