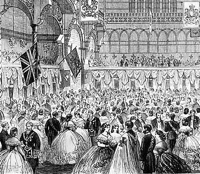 The ball was as grand and opulent as expected and 1,000 guests turned up at the HAC – a very grand venue flanked in burning flames and sports cars, in the heart of Moorgate- to experience ”the best of English tradition, entertainment, and hospitality” and all money raised on the night went to two charities- Combat Stress and the Royal College of Surgeons.
Hosted by the Masonic lodges of the Universities of Oxford and Cambridge, and with guests from several London lodges, the University Lodges’ Ball was open to members of the public too.

The ballroom was filled with gentlemen in White Tie and ladies in magnificent evening dresses for what I was promised would be ”a night of sparkling conversation, entertainment, and dancing”. Whilst mingling pre-dinner and taking in the champagne reception and string quartet, all I could think of and smile about, was the e-mail a friend has sent me the night before, warning me not to attend as ”they are blood-drinking, flesh-eating, shape-shifting extra-terrestrial reptilian humanoids. They are our leaders, our corporate executives, our beloved Oscar-winning actors and Grammy-winning singers, and they’re responsible for the Holocaust, the Oklahoma City bombings and the 9/11 attacks …”

I put this to a few of the guests I mingled with, who laughed and warned me to prepare for the drinking from skulls part of the evening post dinner. Others giggled and said the rumours were silly and that you could see by this evening that ”we provide more charity than any other group on the planet”.

You can read the rest of the Huffington Post blog entry HERE.