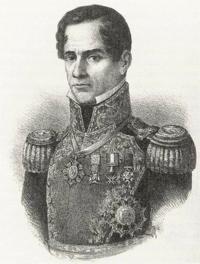 That’s some pretty heady stuff, considering Freemasons who were at the Battle of the Alamo:

From the Sacramento Bee article:

“According to M. Douglas Adkins, the top Scottish Rite official in Texas and a member of the Supreme Council of the Scottish Rite of Freemasonry in the Southern Jurisdiction, a person must be a Master Mason to be eligible for Scottish Rite membership in Mexico, as in the United States. Today’s announcement resolves arguments by Texas historians who have contended there has been no proof of General Santa Anna’s membership.

The significance of this announcement in terms of Texas history stems from numerous reports that General Santa Anna saved himself from execution after being captured at the battle of San Jacinto in 1836 by giving secret Masonic signs to Texas soldiers and later to General Sam Houston, a well-known Mason. The Texas critics of these reports have said that General Santa Anna would not have known of such secret signs unless he actually was a Mason, for which no proof had previously been provided.

Mr. Adkins emphasized that the Texas Scottish Rite is taking no position in this historical controversy, and is only confirming General Santa Anna’s Masonic membership.

Mr. Adkins said Masonry always has celebrated its history and the lives of many of its members, including George Washington, Benjamin Franklin, William B. Travis, James Bowie and Davy Crockett. The Texas Scottish Rite is pleased to provide this information for the use of present and future Texas historians.”

You can read the entire SacBee article HERE.

You can visit Christopher Hodapp’s Freemasons for Dummies blog HERE.

You can pick up copies of Brother Hodapp’s books on Amazon HERE.