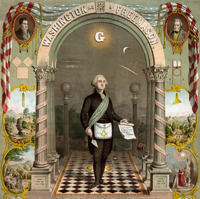 Charles Morgan and Hubert Walker recently posted an article about Masonic coins and history on CoinWeek:

According to some, the secretive fraternity of the Freemasons is elitist and anti-democratic. Still others have questioned the organization’s spiritual views

For those initiated into the fraternity, Masonry is said to offer a path to self-improvement and lifelong friendships.

Historically, public suspicion of the group has its peaks and valleys. Thanks to a certain strain in American cultural life, fueled by the internet but with roots much older, we seem to be climbing towards another peak.

Which is strange, considering how most of the organization’s “secrets” are a google search away. Contemporary masons are better known for community service than occult secrecy, and a great number of fraternal orders – from the Ancient Order of Foresters to the Knights of Columbus, and from the Loyal Order of Moose to the Lions Club International – are offshoots of Freemasonry.

Regardless, what most laypeople can agree on is that the Freemasons, a mysterious brotherhood extant for nearly three centuries, count among their ranks the past and present titans of industry, prominent thinkers and scientists, politicians and world leaders, authors of great renown, and a host of other paragons of both worldly and spiritual success.

Yet one “secret” that even masons themselves may be unaware of is that the past century of American coinage has been a veritable golden age of masonic commemoration. Since 1900, 38 Americans represented on a United States coin were also Freemasons.

They represent an era of U.S. coinage filled with history, intrigue, and more than a few surprises.