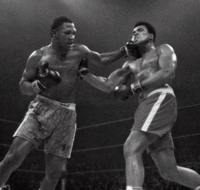 Frazier began his professional career as a heavyweight boxer at the 1964 Olympics, where he won the USA’s only Olympic Boxing Gold medal, even though he fought his final bout with a broken left thumb.

Phil Berger, author of Frazier’s autobiography “Smokin’ Joe,” writes that Frazier’s first trainer, Yank Durham gave him his nickname. The name came from, as Frazier describes, “what Yank used to say in the dressing room before sending me out to fight: ‘Go out there, goddammit, and make smoke come from those gloves.'”

Frazier had a very ‘utilitarian’ style of fighting. Unlike Ali, Frazier would stalk his opponents around the ring, head low, bobbing, and bear down on the other fighter with pounding jabs and crushing body blows. He had a blue-collar approach, crouching low with his shoulders hunched. Taking damage and wearing down his opponent until he could nail them with his legendary left hook.

Smokin’ Joe’s professional career lasted eleven years. During his tenure in the squared circle, Frazier won 32 fights – 27 by knockout – losing only four times – twice to Muhammed Ali and twice to George Foreman. He fought in two of the most legendary contests ever recorded; the Fight of the Century in 1971 against Ali, and the fight regarded as one of the greatest fights in in boxing history: the Thrilla in Manila championship bout in 1975.

Smokin’ Joe Frazier was a member of M.B. Taylor Lodge No. 141 in Hammonon, New Jersey.

Joe Frazier is survived by his sons Marvis, Hector, Joseph Rubin, Joseph Jordan, Brandon Marcus and Derek Dennis and his daughters Jacqui, Weatta, Jo-Netta, Renae and Natasha as well as his sister.