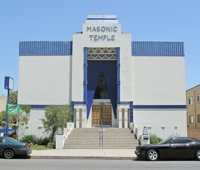 The Scottish Rite Masonic Temple has been sold.  From the Los Angeles Times:

Bluejeans moguls Maurice and Paul Marciano have bought one of Los Angeles’ most notorious real estate white elephants, the Scottish Rite Masonic Temple on Wilshire Boulevard, and they have plans to turn it into a private art museum.

The imposing marble-clad edifice, which has seen little use since 1994, will undergo a major renovation to house the Marcianos’ contemporary art collections. It will be operated for the most part as a private property, with occasional exhibitions open to the public.

There is plenty of room to work with — nearly 90,000 square feet — in the temple conceived by artist Millard Sheets, one of Southern California’s best-known designers.

The four-story building, which traverses a full block of Wilshire between Lucerne and Plymouth boulevards, sports white marble and travertine that Sheets personally selected in Italy. It is decorated with intricate mosaics depicting historical scenes and larger-than-life statues of important Masonic figures including George Washington.

The Maurice and Paul Marciano Art Foundation bought the property from the Masons for $8 million, according to public title documents. The Marcianos are co-founders of clothier Guess Inc.

“We have been looking for a home for the collection,” said William F. Payne, a spokesman for the Beverly Hills foundation. “It’s a legacy project for the family.”

It’s unclear when the museum will be finished and how much it will cost, he said, but Sheets’ vision will remain.

You can read the whole story HERE.