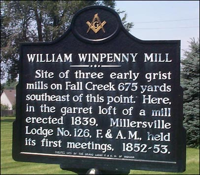 John Russell for the Indianapolis Star writes about the sometimes controversial topic of a Masonic Lodge changing with the times:

The postcards go out every winter to thousands of households across the Northeastside, with language that could come straight out of “Mad Men” or maybe a Shakespearean play.

“You and your lady are cordially invited to an open house and lunch.”

It’s from the Millersville Lodge, the men’s-only organization housed in a massive brick and stone building at the corner of Kessler Boulevard East Drive and Fall Creek Road.

For decades, the building was tightly closed to outsiders, and members were forbidden to recruit. Prospective members had to know about the organization and petition to apply. “To be one, ask one,” was the longtime slogan.

“Even a father couldn’t ask his own son to join,” said James C. Strauss, the lodge’s junior warden.

But five years ago, lodge officers decided they needed to be more welcoming. They began holding open houses, inviting men (and their ladies) for a tour and a presentation on two Saturdays in February and March. The next open houses are Feb. 22 and March 29.

The lodge is still all-male, but wives are invited to the open house so they can see where their husbands will be spending their Tuesday evenings, having dinner and learning lodge history or planning a volunteer project.

“Honestly, when you’re married, you know who the boss is, right?” said Christopher Hinshaw, the lodge’s worshipful master, or top officer.

Millersville is one of Indiana’s largest and oldest Masonic lodges, founded in 1852 and housed in its current building since 1926.