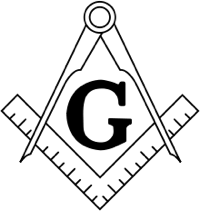 “The only thing I had any knowledge of was from what the movies show,” Truax said. “That whole mystery side of it — it didn’t take long to realize that’s purely Hollywood talking.”

After years of dwindling membership, the fraternal organization — whose ranks included many of the nation’s founding fathers — is attracting a new crop of younger members who aim to return the group to its standing as a pillar of the community.

Truax and O’Neill, who is 45, are part of a new generation of members bringing new blood and spirit to the organization, which is modeled on the craftsman guilds responsible for building Europe’s cathedrals and traces its modern roots to the early 1800s.

Founded in 1853, Frontier Lodge 45 is older than the city itself and counts among its members Nathan Myrick, the first white settler, and Col. T.B. Stoddard, the first mayor.

On the North Side, Lodge 190 was chartered in 1873 and built a temple at St. Cloud and Rose streets part of which is still occupied by Buzz’s Bikes.

In a pamphlet written by its secretary Frank “Doc” Powell — the self-styled frontiersman, medicine man and two-term La Crosse mayor — the Frontier Lodge 45 had 194 members in 1900.