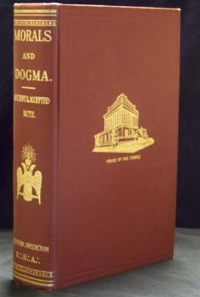 What will the Masons say this time? Will they deny that Pike was a Mason? Will they claim the book doesn’t exist? Will they say that his quote is misconstrued or out of context? I have heard all of these responses before and would appreciate a clear answer.”

It’s unlikely, also, that you’re actually ‘reading’ Morals and Dogma; most people who pull out these quotes as definitive ‘proof’ or a ‘fact’ generally got them out of context from some website that got them from somewhere else.

Since your link is to a specific webpage – and not the whole book – and the only other things on that webpage are links to other specific pages of Morals and Dogma, it’s far MORE likely that you’re just another one of those whack jobs who cherry pick nonsense and attempt to make it something that it’s not.

Being the magnanimous fella that I am, I’ll go ahead and help you out:

Your argument fails on virtually every level. You couldn’t understand even the simplest of sentences – written in plain english – and drew a conclusion that just isn’t based on facts or reality; it’s based on fantasy.

In closing, it’s important to clarify that you presented no ‘facts’ in your additional argument, only conjecture based on incomplete information that was taken out of context for the sole purpose of discrediting a group you know nothing about – and made no attempt to learn anything about.  The answer to your original question is “nope, Freemasonry isn’t a religion.”

If you have any additional questions, please feel free to ask (might want to do some actual research FIRST next time, though).