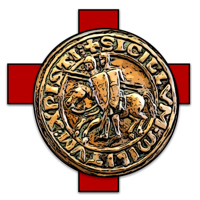 Wherever these building were constructed, the Knights Templar had holdings. Templar ‘districts‘ were holdings that weren’t subject to city or country taxation (they were – technically – Church property), and where the ancillary personnel for the Commandry or other Templar operations lived. Many masons lived within the Templar districts, and by the 1200s, both group began profiting from each other’s expertise. Both groups simultaneously created labor unions, Masons (through historic documents) joined the Templars and worked on Templar and church buildings. Templars needed buildings for banks, churches and other buildings, and Masons … well, they were builders.

Everything was built by Masons, financed by Templars.

After the Knights Templar were arrested, their buildings certainly didn’t disappear. Neither did the districts where many Freemasons and Templars lived. This same held true in England, Scotland, Ireland, Spain and other nations throughout Europe. Masons and Templars living in the same communities, doing much the same work (especially after the decline in popularity of running Crusades in the Holy Land).

This included building Roslin Castle (not to be confused with Rosslyn Chapel), which was started in the early 1300s, after a large influx of Freemasons from France … this “large influx” happened right around the same time as the French arrest of the Templars. Henry Sinclair (who was a witness at at least one Templar trial) is linked to the Knights Templar, as is his son and the entire Sinclair clan from the 1300s.

There is plenty of paperwork and documentation to prove the intermingling of the two from the earliest founding of the Templars, through their arrest, and up through the point where Freemasonry changed from operative guilds to a speculative worldwide fraternity.