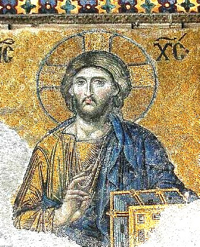 Catholicism isn’t pagan sun worship; the Catholic Church is the church founded by Jesus Christ. The Bishop of Rome is the only one who can claim Petrine authority and primacy. Through and unbroken line of successors – beginning with Peter and continuing through the current Pope – only the Roman Catholic Church can claim to be the church founded by Jesus Christ.

The Catholic Church didn’t create a ‘white image’ of Jesus, nor is there any image of Jesus with the sun drawn behind his head. Perhaps you’re unfamiliar with what a ‘halo’ is as it relates to religion (hint: it’s not a video game for xbox).

Catholics don’t worship statues. That would be idol worship – the sin of idolatry – and would violate that whole ‘graven image‘ bit in Exodus (that’s a book in the Bible. You should try reading it sometime…). Catholics definitely have statues. They don’t pray to them. That’d be silly; statues – regardless of who they represent – aren’t God. To a Catholic, a statue is a focal point that focuses their attention, and amplifies their voice in prayer to God. Statues are, in essence, microphones to the Almighty.

The Scriptures take place mostly in the areas where modern-day Israel, Egypt, and other countries are along the Mediterranean Sea. With the exception of Upper Egypt, ‘everybody’ wasn’t ‘dark skinned.’ Might want to recheck how much melanin people in that area have.

Of course, the next question is: how do you know Christ DIDN’T have blue eyes? Many people from northern Israel have blue eyes. Mary was from Nazareth in Galilee, and many women from that area have blue or blue-green eyes.

The statue of the Resurrection at the Vatican … which one? There’s certainly more than one. And – while Google is a great resource – you might want to stop looking at all those hate-filled anti-Christian sites; they can tend to make the simple minded parrot stupid things on he internet.

The Vatican doesn’t have any ‘madusa’ vase.

The Vatican doesn’t defend pedophiles. The Vatican defends priests who have been accused of crimes through their legal department and defense funds. If those priests are found guilty, they’re defrocked and removed from the priesthood. EVERY person should have defense council – even if that person is eventually found guilty. Duh.

“Most” of the pedophile cases aren’t against “high end priests.” There’s NO SUCH THING as a ‘high end priest.” Obviously, you don’t know church hierarchy very well. MOST cases are against priests. JUST priests (sorry, priests…). While some are – and have been found – guilty, not all are guilty.  People have been known to make false accusations – especially against deep-pockets victims like the Catholic Church.

There aren’t very many people in the Vatican who are Freemasons. In fact, I only know of two, and neither of them are in the priesthood; one is a Swiss Guard, the other is a tour guide.

I understand that you are ignorant, and need to express your ignorance in public because you desperately need attention. But – and this is important – there’s GOOD attention and BAD attention. Right now, you’re – obviously – just trying to get someone to talk to you because you feel lonely and neglected.  But you’re attracting BAD attention; people who will think you’re an idiot, and treat you like you’re one.  These aren’t people who will eventually become your friend, these are people who will look down upon you, treat you like the moron you’re acting like, and walk away.  Bad attention will never develop into any kind of relationship that’s of any value.

I’d recommend you get into a good Bible-based church in your area. I’m sure there’s a nice Catholic one within walking distance of your parent’s house.