END_OF_DOCUMENT_TOKEN_TO_BE_REPLACED

Samantha Clark from the Oakland Tribune is reporting in the Contra Costa Times that Oakland’s historic Scottish Rite Center is undergoing an extensive renovation.  From the article:

The Scottish Rite Center that overlooks Lake Merritt is undergoing a $1.2 million renovation to return the lodge to its original glory.

For 60 days, the building will close so workers can replace the roof, install LED lighting and sound systems and make the building handicap accessible. The grand dome theater will get a fresh coat of paint and 24-karat leafing on its details.

END_OF_DOCUMENT_TOKEN_TO_BE_REPLACED

Pike was born in Boston, Massachusetts, son of Ben and Sarah (Andrews) Pike, and spent his childhood in Byfield and Newburyport, Massachusetts. His colonial ancestors included John Pike (1613-1688/1689), the founder of Woodbridge, New Jersey. He attended school in Newburyport and Framingham until he was 15. In August 1825, he passed entrance exams at Harvard University, though when the college requested payment of tuition fees for the first two years which he had successfully challenged by examination, he chose not to attend. He began a program of self-education, later becoming a schoolteacher in Gloucester, North Bedford, Fairhaven and Newburyport. END_OF_DOCUMENT_TOKEN_TO_BE_REPLACED 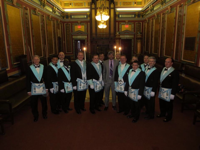 Mo Rocca parts the veil of secrecy on the fraternal order to learn about the history and rituals of the Freemasons.

Barring any major news (Mandela’s passing may change the show), Mo Rocca’s piece on Freemasonry will be aired this Sunday on CBS Sunday Morning.

The piece was put together between January and April of this year, and showcases members of the Grand Lodge of New York as well as the House of the Temple.

Check your local station and times!

The Scottish Rite Masonic Temple has been sold.  From the Los Angeles Times:

Bluejeans moguls Maurice and Paul Marciano have bought one of Los Angeles’ most notorious real estate white elephants, the Scottish Rite Masonic Temple on Wilshire Boulevard, and they have plans to turn it into a private art museum.

The imposing marble-clad edifice, which has seen little use since 1994, will undergo a major renovation to house the Marcianos’ contemporary art collections. It will be operated for the most part as a private property, with occasional exhibitions open to the public.

There is plenty of room to work with — nearly 90,000 square feet — in the temple conceived by artist Millard Sheets, one of Southern California’s best-known designers.