The Patron Saints of Freemasonry

Every Freemason is knows that immortal phrase: “Erected to God, and dedicated to the Holy Saints John.” Every American Blue Lodge is thus dedicated.

Masonic history – from before the creation and dedication of the Grand Lodge of England in 1717 – makes frequent reference to the “Lodge of the Saints John at Jerusalem.”  Operative Masons are referred to both in Masonic documents and elsewhere as “St. John’s Masons” or “St. John’s men,” and Lodges of St. Johns Masonry existed in Italy, France, and Spain during the Middle Ages and Renaissance.  Stonemason Lodges in England and Scotland from the time of the Crusades had one or Both Saints John as their Patron Saints.

In Duncan’s Masonic Ritual and Monitor of Freemasonry (by Malcolm C. Duncan, 1886) the two Saints John are referenced as being “two perpendicular parallel lines” and elsewhere in Masonic texts as “perfect parallels in Masonry as well as in Christianity.”

While it would seem to make more sense that St. Thomas – the patron saint of architects and builders – would be a ‘better fit’ and a simpler choice to be the sole Patron Saint of Freemasonry, the fraternity, lodges and guilds chose both Saints John instead.  And for and extraordinary reasons, rather than a simple, pedestrian and uninspiring one;  Christianity has long held that John the Baptist was a zealous man, while John the Evangelist was an intellectual.  By linking these two men symbolically as parallels, Freemasonry positions each Mason as being balanced between the fervency of passion and the tranquility of intellect.  It being necessary to have both passion and logic to accomplish great and inspired works. 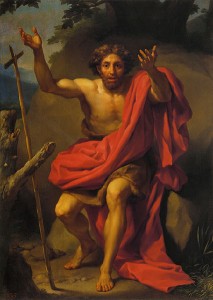 Saint John the Baptist is described in all four Gospels, and in virtually the same way in Matthew, Mark, Luke, and John.  He was a humble man who lived a simple life.  A cousin of Jesus Christ, he spent most of his life baptizing believers in the River Jordan.  He was a devout man who held fast to his obligations to God with an immovable and incontrovertible faith.  Jesus Christ, in Matthew and Luke, says of John the Baptist “Verily I say unto you, Among them that are born of women there hath not risen a greater than John the Baptist…”

Zealous in his faith and rigid in his beliefs, John the Baptist condemned King Herod for marrying Herodias in violation of Old Testament Law.  At this time John the Baptist had many followers and – fearing a rebellion, King Herod had John arrested and imprisoned.  King Herod said that if John would change his tune, he would be released.  John continued with his message – that one must live a holy life and not deviate from it – and continued in his devotion to Jesus Christ.  The daughter of Herodias danced before King Herod, and King Herod granted her favor.  That favor was the head of John the Baptist.

Saint John the Evangelist, according to Christian tradition, was one of Christ’s original Apostles.  He was the only Apostle to live to a ripe old age, and is also considered to be the author of the Gospel of John, which begins:

“In the beginning was the Word, and the Word was with God, and the Word was God.  The same was in the beginning with God.  All things were made by him; and without him was not any thing made that was made.  In him was life; and the life was the light of men. And the light shineth in darkness; and the darkness comprehended it not…” – John 1:1-5, KJV

The emphasis on ‘light’ being linked to divinity is a concept familiar to all Freemasons, while the logic and writing is similar to the Book of Genesis.

John the Evangelist wrote extensively, and the central theme to much of his writing was that the Word and Light are inexorably linked.  Of all the Apostles, John the Evangelist is often described as being the most loyal to Christ, and the one closest to Him.  To so high an eminence was John held with love by Christ, that He entrusted the care of His mother Mary to him.

Many book have been written about John the Evangelist.  Even though he was of the Old Covenant – and a pillar of the Jerusalem Church after the Crucifixion of Jesus – he was accorded the same honors and reverence as the first Saints of the Christian Era.

In the operative days of Masonry, the Feast of St. John the Baptist was always celebrated in Europe by the Masonic Lodges.  John the Baptist, being the patron saint of these Lodges, was a figure to be revered.

As Freemasonry spread across the oceans, and the fraternity became more speculative than operative, the Feast continued to be celebrated around the globe.  In America, for instance George Washington, Benjamin Franklin and other Founding Fathers took time every year to attend the festivals put on by their respective Lodges.  And in England, the Grand Lodge of England – the Mother Lodge – was created on June 24th, 1717 – St. John the Baptist’s Day.  In many Lodges in virtually every jurisdiction, there continue to be feasts held on this day.

Traditionally, the Masonic Year used to conclude during the Month of December, and in some jurisdictions the Festival of St. John the Evangelist is still considered the start of the Masonic Year. Lodges used to mark the Festival day with special events and commemoration, but this has fallen out of favor over the course of time, and many Masons do not even know when St. John the Evangelist Day actually occurs.  Even the Grand Lodge of England, which used to meet on this day, has discontinued this practice.

It is unlikely that either of the Saints John were members of the fraternity, given that – although Freemasonry has existed from “time immemorial” and both men were born after the building of King Solomon’s temple – they both had other (and, clearly, higher) callings.

The reasoning behind dedicating Blue Lodges to these two saints – and celebrating them every year – is because these two humble men exemplified the pure principles of Freemasonry in their deeds and in their words.  They showed a reverence for the glory of Deity, a strong devotion to their great Creator, and worked every day to make themselves better men and their world a better place.  Their lives are worthy of all emulation.