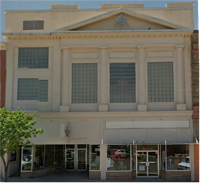 After a number of years of meeting at different locations in town the brethren determined to build their own Lodge temple. Following approval at one of their Stated Meetings they purchased the lot where the Temple is now located on April 20, 1912 at a cost of $13,000 and a projected investment of $9,000 to build the temple. Following completion and dedication of the building, the Lodge held its first stated meeting there on October 7, 1913.

On Sunday March 9, 2014 at 9 AM, Most Worshipful Grand Master William A Garrard, Jr. and the Grand Line officers will open a meeting of the Grand Lodge in the lodge room located at 180 N Broad Street, Globe, Arizona. At 10 AM we will start the public ceremony for the dedication of the Temple on the occasion of its 100th anniversary. We are expecting a large attendance from the Grand Lodge officers,

Grand York Rite Officers, Scottish Rite & Shriners. A light lunch will be available after the ceremony in the dining room located on the third (3rd) floor. We would appreciate hearing from you if you plan to attend.